High-end car manufacturers are adopting subscription-based services in order to offer levels of convenience that stretch beyond traditional forms of ownership.

With 34% of consumers believing that ride-sharing apps are more convenient than car ownership, according to Capgemini, automotive brands are having to make significant adjustments to business models that have traditionally focused on leasing or selling one vehicle to one purchaser. This is particularly true among younger consumers, of which 43% felt that owning a car was a ‘hassle’, according to a 2016 survey by Nerdwallet.

This attitude change is having an effect at all levels of the car market. Already, the mobility and sharing-economy sectors are inspiring many mid-tier brands to enhance their offers. Now, it seems premium car marques are following suit. ‘Mirroring the larger luxury sector, car manufacturers are finding that a legacy brand is not enough to attract the interest of newly affluent customers,’ says Skift's Samantha Shankman. She adds that luxury vehicle manufacturers are responding by ‘entering the third wave of connectivity’ in which ‘manufacturers invest in cloud-based technologies’ to enhance their offer.

This new layer of digitisation is enabling a shift towards subscription and concierge models, rather than outright-purchase models, to offer high-net-worth car aficionados increased flexibility and convenience in terms of product delivery, choice and aftercare.

Image: Desires of the Flesh by Cathrine Disney

This shift is initially happening by degrees, with legacy brands looking to build subscription-like services into their larger sales strategies.

Available exclusively to pre-existing customers, Bentley on Demand, described by the marque as a ‘luxury mobility solution’, embellishes the standard ownership model, rather than replaces it. Accessed through the Bentley Network app, the free service allows customers to borrow a vehicle, from across the brand’s range, for occasions when the customer’s own vehicle is inappropriate, such as during longer trips, or when traveling overseas. Vehicles are conveyed to and from the customer’s chosen location, with a concierge explaining the car’s key features before handover, combining an element of product discovery within the core car-hire offer.

BOOK by Cadillac is the American car brand’s latest attempt to introduce first-time drivers to the luxury end of its line-up. The concierge service, which costs £1,397 ($1,800, €1,553) per month, launched in New York in February 2017, before expanding to other major American cities, such as Los Angeles and Dallas. The subscription works on a month-to-month rolling contract and can be cancelled with 30 days’ notice. Members can swap their vehicle up to 18 times per year, managing their selections through a proprietary app.

It is important to note that, in the long run, Cadillac sees this new service as a sales tool rather than an end in itself, hoping that users will eventually convert to leasing or purchasing their preferred car. The gamble is that, while today’s younger drivers are rejecting traditional ownership models, they might revert as they get older.

‘Mirroring the larger luxury sector, car manufacturers are finding that a legacy brand is not enough to attract the interest of newly affluent customers’ 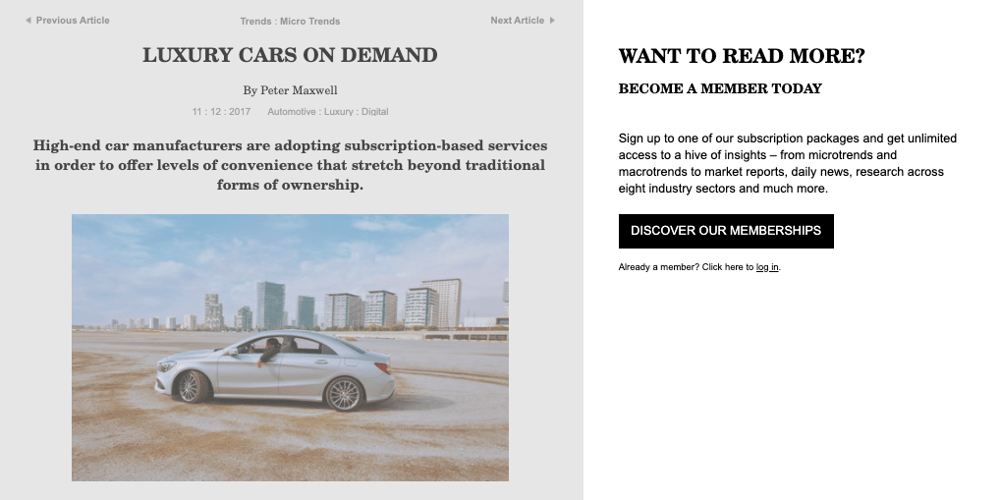