Every year the fashion industry uses 93bn cubic meters of water – enough to meet the consumption needs of 5m people, while its greenhouse gas emissions will increase by more than 50% by 2030 (source: World Bank). With brands now hyper-aware of the impact a lack of sustainable practice could have and, in turn, their customers starting to vote with their wallets, a number are going to new lengths to generate sustainable strategies that – while potentially putting their immediate profits at risk – but could prove an invaluable move for the future.

Italian fashion giant Prada, for example, is assessing its carbon footprint via a collaboration with French banking group Crédit Agricole. The company recently signed a £42.9m ($55m, €48.6m) loan that has repayment terms subject to Prada reaching crucial sustainability targets. The interest rates will be closely monitored and adjusted favourably or unfavourably depending on Prada’s performance against the social and environmental goals, including stores and buildings with high-level LEED certification, as well as assessing the number of training hours given to employees.

‘This transaction demonstrates that sustainability is a key element for the development of the Prada Group, increasingly integrated into our strategy. We are confident that this collaboration… will help to extend the benefits of a responsible business to the financial world,' says Alessandra Cozzani, chief financial officer at Prada.

Through the Crédit Agricole partnership and its associated Re-Nylon campaign, launched in June 2019 with the ambition that all 700,000 meters of nylon used by the company every year is recycled, Prada is also conveying that each person within its business has a role in its shift towards sustainable working.

It’s not only luxury brands cracking down on the impact of their operations. So too are FMCG giants such as Unilever, which has announced the company could sell off brands such as Marmite and Magnum that harm the planet through their production or negatively impact society, regardless of whether they are profitable.

A powerful conglomerate like Unilever, the parent company of more than 400 household brands, making such bold business decisions demonstrates the fundamental importance of having eco-initiatives in place to futureproof success. As Alan Jope, its CEO, explains: ‘Principles are only principles if they cost you something.’

He adds: ‘Can these brands figure out how to make society or the planet better in a way that lasts for decades?’, suggesting that brands void of strong and effective sustainable plans could soon feel irrelevant as a result.

Now, Unilever will focus on brands such as Dove, Hellmann’s and Sunsilk, brands that unsurprisingly have eco-friendly strategies already in place, which align with Unilever’s holistic sustainability goals, which include reducing environmental impact by half by 2030. (source: Unilever Sustainable Living). In fact, in summer of 2019, the company announced that its purpose-led, sustainable living brands are growing 69% faster than the rest of the business and delivering 75% of the company’s growth.

Beyond fashion and FMCG, the footwear industry is also in the spotlight, emitting around 700m metric tonnes of carbon dioxide each year (source: Quantis). This is why sneaker brand Allbirds is launching a Carbon Fund and self-imposing a carbon tax on the company. The fund will ensure the brand is carbon neutral by paying for initiatives such as rainforest conservation and supporting wind farms to produce renewable energy. Its self-imposed tax is calculated via an intricate formula that even accounts for the smaller details of its operations. For example, it takes into consideration how much carbon is created farming the sheep that provide the wool for its shoes, as well as the transport along its supply chains, and energy consumption at Allbirds’ headquarters.

‘Principles are only principles if they cost you something.’ 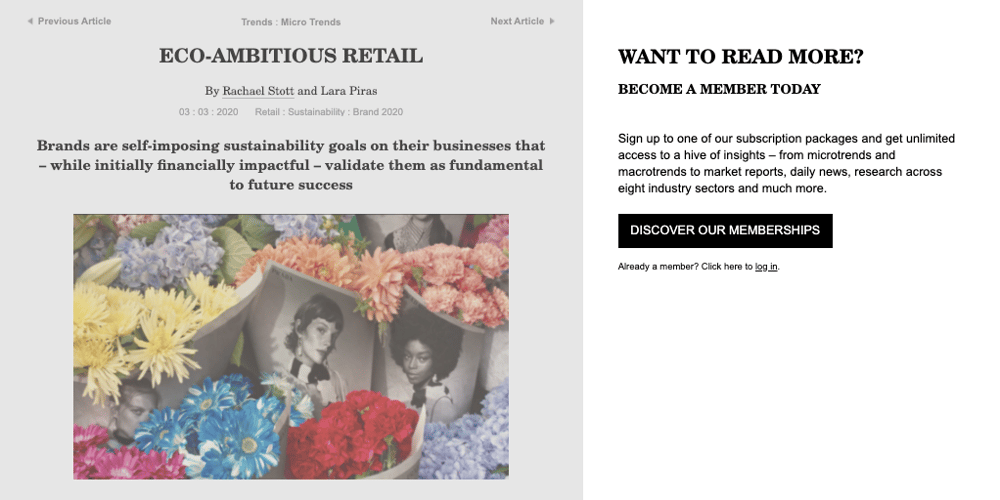