Hacking Finance in collaboration with Anthemis

1. A magazine that crowdsources the future of finance

London – The events series Hacking Finance has launched an eponymous print magazine exploring the future of financial services from a broad range of perspectives.

In collaboration with Anthemis, a London-based fintech venture capital firm, Hacking Finance’s mission is to re-invent finance for the digital age. The new magazine sets out to build a community and cultivate change by inviting voices from different fields and disciplines to contribute stories, essays, interviews and other relevant content for publication. With stories about skateboarding, colonialism and outer space, the first issue – themed around the idea of movement – looks at financial policy, opportunity and access.

Calling itself ‘a new commons for the new eco-system’, Hacking Finance reflects some of the ideas we touch on in our Morality Recoded macrotrend; chiefly, that consumers now expect brands to break out of their silos, open up dialogues and consider their customers as collective stakeholders.

My Skin Track pH by La Roche-Posay, L'Oréal, US

Las Vegas – The beauty conglomerate has launched a new wearable that uses microfluidics technology to measure the pH level of the user’s skin.

My Skin Track pH comprises a patch sensor that is worn on the arm for up to 15 minutes and a supporting app that uses an algorithm to compute skin pH and rate of perspiration. From this data, the app will suggest skincare products to help alleviate complaints such as dryness and eczema. The patch was revealed earlier this week at CES 2019, where L’Oréal received the Innovation Award for the Wearable Technology Products category.

According to dermatologists, pH is an important indicator of skin health, with healthy skin falling in the slightly acidic range between 4.5 and 5.5. But inflammation and environmental factors can cause a pH imbalance, exacerbating many common skin concerns.

L’Oréal’s Technology Incubator has already developed a number of high-tech wearables, including My UV Patch. As explored in our At-home Analysis microtrend, brands in the beauty sector are creating diagnostic tools that inform consumers about their specific skincare needs.

5. Audi wants to auto-tain you

Las Vegas – Having hinted at its new collaboration with Disney as a first-of-its-kind media format, Audi has now officially launched its in-car virtual reality (VR) system.

The demo, entitled Marvel’s Avengers: Rocket’s Rescue Run, is designed to be played while the vehicle is moving. Dubbed ‘elastic content’, the VR experience will be tailored to last for the duration of each journey and will be able to pick up cues such as when the car stops at a traffic light or turns a corner, translating this into the game’s narrative. In addition, the content will also be tailored to suit the terrain the car is driving in, so if the car were to be driving through a desert the VR would take place in a similar location.

While Audi played a pivotal role in creating this new entertainment category, it announced that Holoride, a start-up in which it owns a minority stake, will spearhead the project and help to launch it to market.

As the Ride-share Market matures and the mainstream introduction of autonomous vehicles draws ever closer, automotive brands are thinking up new ways to transform the car into an entertainment hub by collaborating with established content producers.

Israel – Food technology start-up Aleph Farms has successfully grown the world’s first slaughter-free steak, which the company claims it will bring to market within two years.

Grown using different types of living cells from a cow, the prototype mimics the texture, flavour and shape of a real beef steak, establishing a new benchmark for cell-cultured meat. Until now, one of the barriers to lab-grown meat production has been getting various cell types to grow and interact with each other in order to produce a complete tissue structure. Aleph Farms overcame this obstacle thanks to a bio-engineering platform developed with the Technion (Israel Institute of Technology).

‘The technology we developed marks a true breakthrough and a great leap forward in producing a cell-grown steak,’ says Didier Toubia, co-founder and CEO of Aleph Farms. As new technologies enable the successful growth of various meats, the way they are marketed will, much like fake meats, ultimately determine their success. 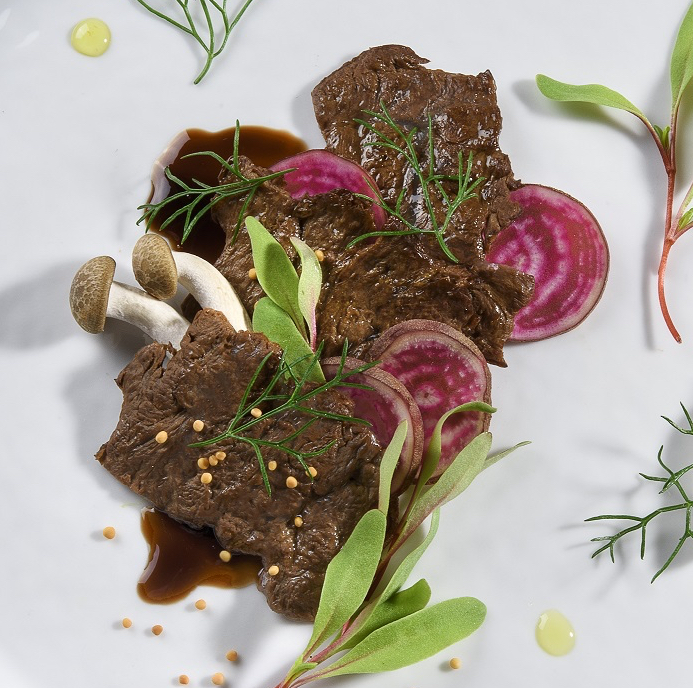 3. The PANGAIA collective goes all in on ethical fashion

New York – The collective and fashion brand aims to create a global open-source platform for the latest eco-solutions.

PANGAIA is made up of scientists, technologists, artists and designers who are working together to create sustainable clothing made from renewable resources and lab-grown materials. Its first collection is a range of bio-based and recycled wardrobe essentials, including t-shirts, tracksuits and puffer jackets.

Committed to a zero-waste circular system, PANGAIA considers its environmental impact in all elements of the customer experience – products are sent in bio-based packaging and can be repaired or upcycled through a partnership with The Renewal Workshop. Furthermore, all garment logos and prints use a water-based PVC-free ink.

PANGAIA is an example of a brand incorporating eco-friendly values into every aspect of its business. Earlier in 2018, we spoke to Dr Daniel Benkendorf about the issue of sustainability, and why both consumers and fashion brands have been so slow to embrace it.