California – Evenprime is an American brand of skincare imbued with the nostalgic aesthetic of 1990s anime.

Drawing on Asian pop culture, its branding challenges packaging clichés and gender norms in the personal care industry. ‘We didn’t just want to sell soap. We wanted to sell a feeling,’ says co-founder Rickie Ashman. ‘As kids, our interest in fashion and beauty stemmed from playing games like Final Fantasy and watching shows like Sailor Moon. We decided to explore this tension in hopes of bringing people together.’

The unisex range of gentle, dermatologist-approved formulas have also been developed in collaboration with chemists in Korea. Products feature hero K-beauty ingredients such as galactomyces ferment filtrate, antioxidant rich botanical extracts derived from Kakadu plum and sea buckthorn, as well as niacinamide and hyaluronic acid. In a similar vein, our K-beauty Lite microtrend explores product launches inspired by K-beauty but made for a Western market.

Dubbed ‘the most interesting store in the world’, Showfields invites consumers to discover, shop and engage with a rotating selection of up-and-coming digital-first brands. Its flagship location in New York’s NoHo neighbourhood hosts a selection of popular wellness, home and design-focused brands alongside dedicated food, drink and event programming.

The retailer’s House of Showfields experience, which runs across the entire second floor of the store, is a first-of-its-kind immersive theatre performance that allows consumers to touch, smell, eat and test various products. Here, actors tell the stories of direct-to-consumer (DTC) brands, such as Boodles Gin, Book of the Month and Skura, with various installations throughout adding to what Showfield’s calls the environment’s ‘magic realism’.

With its entertainment-driven approach to experience, Showfields demonstrates how Department Store Disruptors are further elevating their dynamic showcases of DTC brands.

New York – Apple has collaborated with the New Museum to launch a series of augmented reality (AR) experiences created by leading contemporary artists.

The AR installations have been designed to push the creative potential of the technology. Engaging with the medium, seven artists – Nick Cave, Nathalie Djurberg and Hans Berg, Cao Fei, John Giorno, Carsten Höller, and Pipilotti Rist –have reimagined ways to express core themes of their art practice. The resulting works can be experienced via interactive walks in Hong Kong, London, New York, Paris, San Francisco and Tokyo.

The [AR]T initiative is part of the Today at Apple project, which also includes in-store sessions that teach the basics of creating AR using Swift Playgrounds and an AR art installation viewable in every Apple Store worldwide.

As we explore in our Programmable Realities macrotrend, technologies such as augmented reality are driving a future in which consumer touchpoints are increasingly reactive and fluid.

4. Plants could be the interfaces of tomorrow

Massachusetts – MIT researchers have engineered ‘cyborg’ plants to act as an alternative to electronic screens.

In a process they call Cyborg Botany, researchers Harpreet Sareen and Pattie Maes have turned plants into sensors and displays. For one of the projects, they connected electrodes to a Venus flytrap and Mimosa pudica, allowing the plants to receive signals. Then, through an app, users can watch a live-stream of the plant and choose which leaves to close. This explores the possibility that plants can send notifications – for example, closed leaves could signal bad weather.

For a second project, the researchers grew a conductive wire inside the plant, turning it into an antenna or sensor that could send people an alert when detecting intruders. ‘Plants are self-repairing, self-regenerating organisms available at scale,’ the researchers say. ‘We envision a convergent design world in which we reappropriate our natural capabilities for a new bio-interaction design.’

The project is not the only speculation of how we can turn plants into Immersive Interfaces – read our interview with Grow Your Own Cloud to see how botany can also store data. 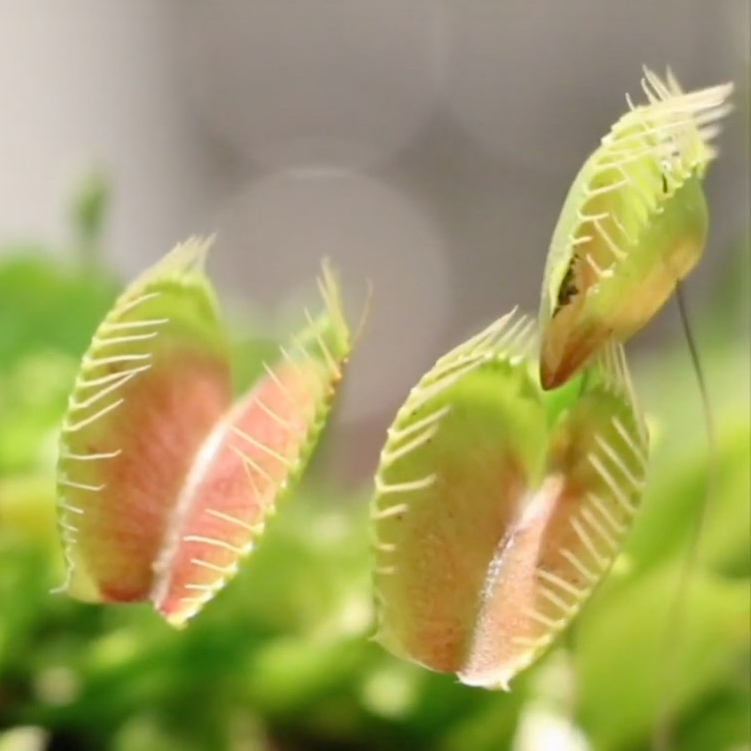 London – L’Orbe is the world’s first caviar-infused vodka, bringing together the fine dining and mixology industries.

The result of five years of research and development by Pernod Ricard’s Breakthrough Innovation Group (BIG), the L’Orbe vodka marks a milestone for the spirits industry. Each recipe has been developed in collaboration with Michelin-starred chefs and leading mixologists, with the first bottle bringing caviar from Gironde and Swedish vodka together in one bottle.

The technology used – micro-encapsulation – is most often found in cosmetics. A transparent tube runs down the centre of the bottle, comprising dozens of caviar pearls. By naturally diffusing the caviar’s aromas into the spirit over the course of six weeks, the vodka takes on a fresh, savoury flavour profile.

By developing entirely new spirits categories, brands like Pernod Ricard are exploring beyond the traditional rules of liquor-making.