Sequel Seat by Layer, US

It incorporates a number of innovative design features such as anti-bacterial copper threads in the seat's textiles, built-in UV lights for sterilisation and protective screens to maintain social distancing. Empowering people to return safely to cinemas, the innovative seating model was developed by design agency Layer some 14 months before the pandemic outbreak, but has been repositioned for the post-lockdown period.

Created initially for a US cinema seating company that went into receivership during lockdown, Layer has now made the Sequel Seat available for licensing by other cinema chains. ‘We believe that a product like Sequel Seat will play a key role in encouraging people to come back to the cinema,’ explains Benjamin Hubert, founder of Layer.

As explored in our recent design direction Positive Barriers, creatives are reframing the visual language of social distancing, using familiar materials and colour to encourage safer navigation of our built environments. 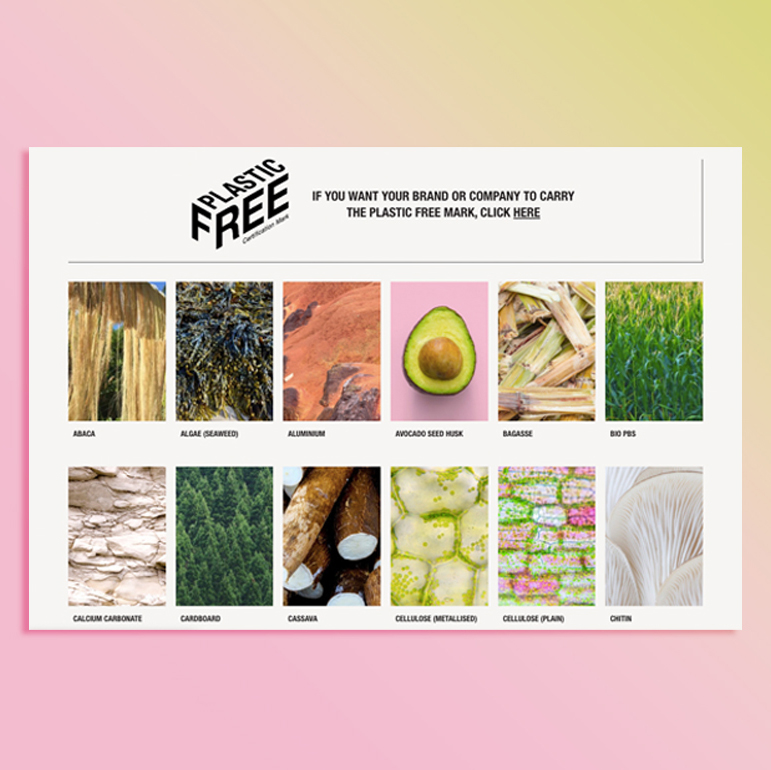 Plastic Free by A Plastic Plane, Made Thought and IBM

London – Plastic Free is a material encyclopaedia launched by A Plastic Planet to help creatives find alternative solutions to the use of plastic in their work or designs.

Born from Made Thought Labs – an initiative tackling the social, environmental and economic threats of the climate emergency and Covid-19 – in partnership with IBM, the blockchain-powered plastic-free materials platform aims to be an invaluable resource for designers searching for plastic alternatives. Launching in spring 2021, the platform will be free for both material suppliers and product designers to use.

‘Our Material Library gives designers worldwide an unbiased, educated wing man as we all seek to turn off the plastic tap and use materials nature can handle. We believe knowledge is power and knowledge this important should also be free,’ reads a statement from A Plastic Planet.

Over 200 suppliers worldwide have been added to the library to date, offering alternative materials ranging from soy and sisal to avocado seed husk.

In our Sustainability Series we explore the ideas, innovations and actions your brand can take today to become part of an eco-positive future.

Welcome to Else by Else Cinema, Global

3. Else Cinema takes a slower approach to adult streaming

Erika Lust Soft Edition – known as Else Cinema – is the film-maker’s first on-demand video platform that offers less-explicit feature-length films. With cinematic storylines that tap into various sexual fantasies, from group sex to passionate affairs, the service bills itself as a safe space that makes softer erotica more accessible to women, couples and younger consumers.

As well as directing many of the films, Lust and her team hand-pick films from a growing movement of ethical and sex-positive directors who positively portray female sexuality. As well as films, Else Cinema will host interviews, behind-the-scenes content, photography and editorial content, providing subscribers with an ad-free experience that aims to change the face of adult entertainment.

As explored in Conscious Deceleration, erotica is undergoing a female-driven transformation, as consumers seek a slower approach to pleasure in the form of Sensory Stimuli.

4. Bio-fashion that decomposes within a day

The LVMH-awarded project uses silk cocoon protein and algae extracts to create 100% biodegradable, glass-like garments that organically evolve as they're worn, eventually decomposing. Through her exploration, Yang found the garments to gradually biodegrade in rain, river, and sea water, while soaking them in 60-degrees Celsius water can speed up the degradation process to as little as 24 hours.

According to Yang, the aim of her project was ‘to challenge the audiences with the concept of material lifecycles.’ The resulting texture and lifespan of each piece is subject to temperature and humidity levels; seasonable changes from hot and humid to dry and cold can make the garments appear more sculptural.

As we explore in Material Far Futures, the materials of tomorrow will be smarter, stronger, more dynamic and less ecologically damaging.

5. A concept store that comments on deforestation

The store's design, which pays homage to nature’s resilience, is a timely comment on the detrimental environmental impact the Bolsonaro government has on the Amazon rainforest. By imagining how the mall could look like in 100 years, design studio Pistache Ganache took inspiration from post-apocalyptic ruins.

'The idea of nature taking over the place is the opposite concept of the present political scenario,' says André Romitelli, partner and designer at Pistache Ganache. As the central element of the store, the garden was inspired by French gardener Gilles Clement's concept of a 'garden in motion'. Most of the plants chosen are known as pioneer plants – hardy species which are the first to colonise previously disrupted or damaged ecosystems.

In our interview with slow retail expert Rebekah Matheny, we consider how physical retail is key to conscious consumption.