As health and wellness becomes entrenched as a mainstream mindset, it is spreading into new areas – moving beyond gyms and expanding across communities and real estate.

‘We’re at the beginning of a new movement in home and community design that tackles our uniquely modern problems: sedentary lives, unhealthy diets, stress, social isolation, pollution and nature deprivation’

Traditionally, health and wellness has been restricted to venues such as gyms, leisure centres and hotels. Now, as the industry becomes more pervasive, it is spreading to other areas. According to the Global Wellness Institute, hotels, gyms and wellness retreats need to be leaders in the wellness architecture revolution. It predicts that in the future our buildings will be designed to make us healthier and happier right from the blueprint stage.

In a bid to increase footfall, retailers and department stores that aren't typically rooted in this sector are increasingly jumping onto the wellness bandwagon by redesigning their offerings. Amid increasing competition from online shopping, declining foot traffic and rising vacancies, mall owners are attempting to draw customers in by including gyms.

British department store group Debenhams, for instance, is opening a selection of in-store gyms, operated by affordable gym operator Sweat!, as part of its strategy to make its stores a destination for social shopping. ‘We believe that by teaming up with Sweat! we will optimise the space that is available in some of our stores while offering an attractive and credible leisure experience to customers,’ explained Sergio Bucher, CEO of Debenhams.

Airports, not usually associated with the sector, are also starting to integrate a wellness offer. This concept was new in 2015, when Gatwick Airport and San Francisco International Airport offered floga classes to passengers to prepare the body physically and mentally for in-flight conditions. Now the trend is expanding to have an impact on the refurbishment of major airports. Heathrow airport recently announced an exclusive partnership with FlyFit to open the world’s first in-airport wellness and fitness studio, and Baltimore-Washington International Airport has opened a new workout space that combines high-end travel with fitness on the go.

Architecture is beginning to move away from its preoccupation with surface aesthetics to focus on creating buildings that have a positive impact on human health. ‘Let’s grow buildings where we can graft tree cells on to frameworks and the contractors can become arborists, but before we get to this point let’s continue to use philosophies such as biomimicry and biophilia,’ wellness architect Veronica Schreibeis Smith said during her talk at the Global Wellness Summit. 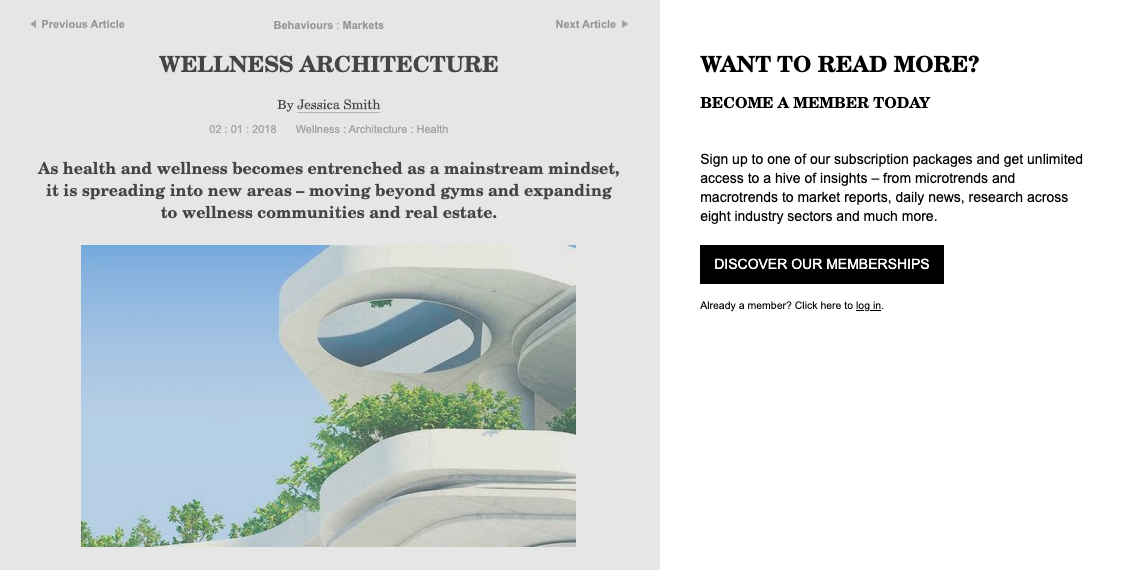