Image: Off Hours, US

With every second of our free time colonised by the cult of busyness, future consumers will turn away from a life of relentless productivity and shift their focus from enhancement to enjoyment

Consumers are emerging from an austere decade that burnt us out politically, socially and economically, one in which global uncertainty generated a lucrative market for personal betterment.

At the dawn of a new decade, this uncertainty has only accelerated. The catalyst that is Covid-19 has thrust consumers into a novel situation that demands action, resilience and – ultimately – a radical recalibration of society as we know it. We are entering a period of reflection like no other in which intensified notions of success, achievement and productivity are proving futile. Amid this chaos, consumers are re-assessing the ideologies of what makes a good life.

Eight years after we unveiled The New Sublimity, our desire for fulfilment is treading new paths. The high-calibre lifestyles we predicted in The Optimised Self have arrived, but are increasingly at odds with the pursuit of mindfulness. Facing a barrage of expectations, it is rapidly dawning on consumers that the self-actualising activities they have bought into – from the wellness industry to the ritual of workism – are hindering their ability to feel fulfilled.

By 2030, however, enjoyment will become a political act against the mechanisms of capitalism. In the past decade, leisure activities have become entangled with guilt, as the fetishisation of busyness has driven an expectation that our free time should be spent refining ourselves physically and intellectually.

But with isolation and solitude rapidly becoming the new normal, there is finally a chance to pause, reflect and embrace the state of liminality. 'In a time when self-improvement practices are big business… enjoyment is a practice of resistance to current forms of unfreedom,' write philosopher Sandy Grant.

As we take time to recentre ourselves, governments are cautiously adopting new metrics of progress that favour personal wellbeing and happiness over economic growth. We can now expect a more gracious approach to consumerism – one in which pleasure, inactivity and the desire to live ordinarily are equally valid metrics of living.

Brands must become part of this new equilibrium. ‘The old narratives of busyness can be undone,’ says strategy executive and sociologist Ana Andjelic. ‘Brands can flip the script and start to celebrate anti-striving… They can alleviate our guilt about doing nothing through the same marketing mechanisms they used to create it… They can portray unceasing productivity as an unenlightened and passé choice.’

Society has become so preoccupied with working that it is no longer just a means to achieve economic stability. The Atlantic writer Derek Thompson calls this workism. He argues that, in our post-faith quest for purpose, work has gained a holy status, but economists have failed to anticipate that ‘for the college-educated elite, it would morph into a kind of religion, promising identity, transcendence and community’.

Workism has been accelerated by the rise in freelancing, which sells workers an illusion of freedom and control. With six in 10 Americans believing that freelancing is the modern version of the American Dream, it’s estimated that there will be 90.1m freelancers in the US by 2028 (sources: Harris Poll, Upwork and Edelman). In Japan, where karoshi culture, or death by overwork, is troublingly prevalent, Deloitte reports that 55% of Millennials are considering taking on short-term contracts or freelance work.

This has led to an intensified notion that time equals money. ‘We’re fed the myth that the way to happiness is paved by self-starters, championing the self-employed lifestyle as the next step on the ladder to self-actualisation,’ says cultural writer Chantal Brocca. However, 'the line that separates work and life becomes blurred until it disappears, and you end up switched on 24/7.'

Our quest for optimisation could be nearing its climax. As technological advancements proliferate, there is a backlash against persistent betterment as consumers realise that a goal of having it all is leading to a deteriorating sense of wellbeing.

Since we identified the Self-quants in 2011, the BBC has reported a rise in self-trackers who use various strategies – such as recording their activities every 15 minutes – to analyse their life experiences in the ultimate act of betterment. 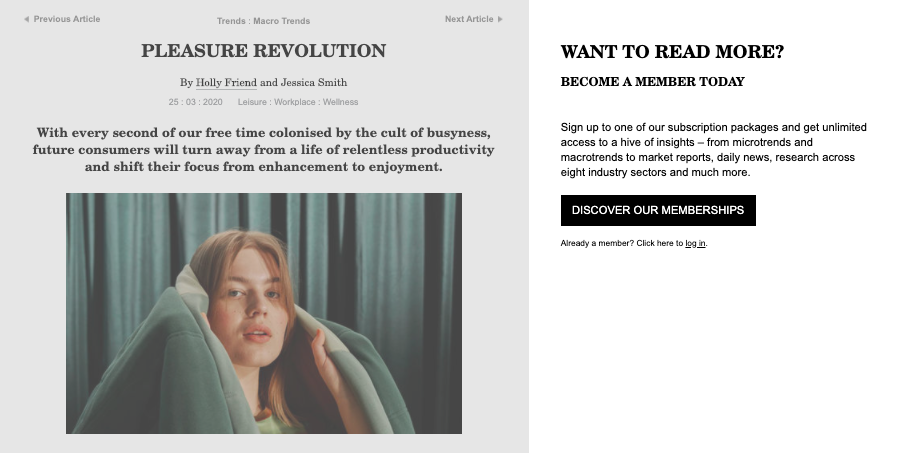