Through the lens of a fictional future scenario, we ask how brands in 2030 will redefine wellness, negate collective burnout and help us embrace our mortality.

It’s the weekend and Jane is delighted. It’s been a stressful week and she’s looking forward to her much needed three days off. Since the government decreed that businesses move to a four-day working week, Jane has felt more motivated and productive at work, maximising her time in the office so she can savour her weekends for rest and relaxation.

Weekends used to be about #selfcare and #fitspo, but Jane is less focused on intensive fitness than she used to be. She was an ultra-marathon runner, but after one particularly gruelling race – after which she immediately posted her finishing pose on social media – she started to question her motivation. Now, she uses her weekends as a chance for a mental reset.

Today, she attends a two-hour yin yoga session, where she can slow down and hold each pose for five minutes – a necessary reprieve for a body worn out by years of running. Afterwards, she heads to her weekly death doula training. Jane had her death predicted at the doctor’s surgery – a free service now offered with every annual check-up – and knowing her precise death day has made her want to become comfortable with the idea of dying. She is learning to become a friend in death to people during their final hours as a way to confront her own mortality.

On Sunday, Jane plans to attend Nike’s Conscious Movement workshop with friends to learn how to build greater body awareness. She heard about it through a link her friend posted on social media app Vero. Like most of her generation (she’s 33), Jane no longer has Instagram or Facebook and rarely posts pictures because it makes her anxious. Instead, she uses Vero to share links to interesting books or talks as a way to still feel connected online. When she does want to share photos, she does so on VSCO because it’s one of the few online spaces where she feels free to be herself, without having to worry about receiving likes or comments.

'As the cultural conversation hones in on stress as a health issue, the wellness industry is offering self-care as a solution'

Burnout has become a global epidemic in the past 10 years, with unexplained mental health sick days now costing the British economy £1.4bn a year (source: Breathe). As the cultural conversation hones in on stress as a health issue, the wellness industry is offering self-care as a solution, which has led to 12.8% growth in the sector between 2015 and 2017, according to the latest figures from the Global Wellness Institute. ‘To avoid burnout, people are encouraged to spend more and exercise harder,’ writes Ester Bloom in The Atlantic on the commodification of self-care.

But, increasingly, consumers are scrutinising their wellness routines and instead of looking for ways to optimise themselves, as they might have done a few years ago, they now want to slow down. Already, some businesses are experimenting with four-day working weeks and the Labour Party is set to release a study in July on the viability of a shorter working week and its impact on British workers.

One route to slowing down has been a re-assessment of why we exercise and what it is for. While HIIT classes are popular for their efficacy, there has been an increased interest in restorative exercises that focus on slow and controlled movement. Studios dedicated to active recovery and assisted stretching, such as ReCOVER and StretchLab, have been launched in the US and the UK. ‘Consumers are becoming more in tune with their bodies and the impact that mindful exercise can have psychologically,’ says Alister Rollins, CEO of MoveGB.

The irony is that self-care, once a reliever of stress, has become a stressor in itself as social media spreads fitness fads and transformation stories. Hashtags such as #self-care, #yoga and #fitspo all have millions of posts on Instagram – with the latter numbering more than 66m posts at the time of writing. ‘There has been a growing awareness of the shadowy side of social media and its impact on our mental health,’ Katie Brockhurst, author of Social Media for a New Age, tells LS:N Global. Brockhurst says that social media has become too ingrained to disappear entirely, but she believes people’s awareness of the anxiety around social platforms will force a reckoning. ‘There are big questions to ponder, like what changes are we willing to make to our own social media use? How can we do it collectively?’ 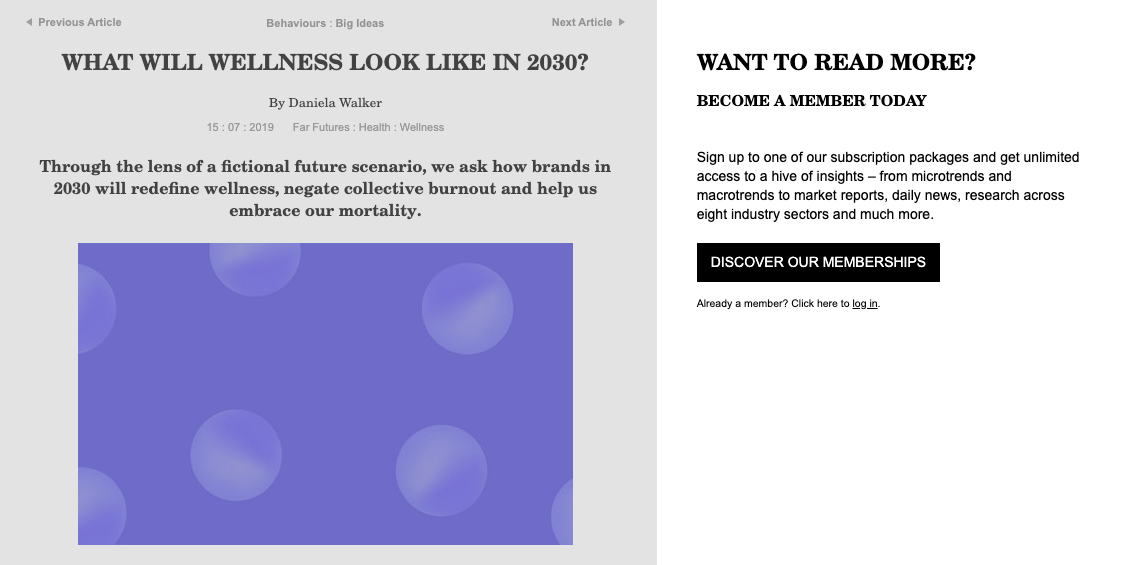