While the mainstream gaming industry has long ignored disabled people, a host of new technologies are enabling brands to adapt to their every need

While disabled gamers make up a significant proportion of the total gaming population, the mainstream industry has too often overlooked them. AbleGamers estimates that there are now about 33m gamers with disabilities in the US, yet until now it has often been left almost entirely to non-profit-making organisations like SpecialEffect and Warfighter Engaged to ensure that games are accessible to people with different needs.

This year, however, marked a shift in focus as new legislation driven by the International Game Developers Association (IGDA) finally became US law. It states that the user interface (UI) for any new release must meet strict design guidelines to ensure that games are accessible to people with a wide range of disabilities.

While some advocates for disabled gamers have lauded the move as a step forward, others believe that it does not go far enough as it only legally applies to the design of in-game communications. In order to better meet the different needs of gamers, IGDA is therefore also promoting the inclusion of people with disabilities at various stages of production, from the design to the testing process.

The simplicity of sound

Despite 1.3bn people around the world suffering from sight loss of varying degrees, designing for visual impairment has often been an afterthought rather than a prerequisite (source: World Health Organisation).

Audio cues have often been added in a clunky way, or game play simplified to such an extent that the user experience is completely altered. There are indications, however, that the tide is beginning to turn as developers rethink their UI in a way that prioritises a much more intuitive use of sound.

In this vein, EA Sports has adapted the kick meter in its Madden NFL game to visually and aurally indicate when it is passing over the correct power and accuracy zones. EA Sports accessibility lead Karen Stevens explains that although the priority for the brand is to create an experience that can be enjoyed by all, the rise of new technologies also allows those with visual impairments to enjoy the same complexity of game play and competitiveness as their sighted peers.

This is the approach behind the racing auditory display (RAD), which has been developed by researchers at Columbia Engineering. They have combined a sound slider that indicates the car’s speed and trajectory with a turn indicator system that informs players about the direction, sharpness, length and timing of forthcoming turns to create an intuitive sound profile that is updated in real time.

For too long, brands have made assumptions about how gamers control game play; namely, with their hands and thumbs. Now, however, brands like Microsoft are recognising that the traditional controller design is not best suited to all gamers’ mobility needs. ‘The traditional Xbox controller makes a lot of assumptions. It assumes I have two hands to hold it, two thumbs to hit the analogue sticks and the fine motor control to get at all the buttons. That’s a barrier,’ says Bryce Johnson, senior inclusive designer at Microsoft.

The controller has been redesigned with features like larger buttons, which can be operated using hands, elbows or feet, as well as a row of 19 ports for users to add more devices such as touch-sensitive pads. Beyond simply redesigning hand-held controllers, there are opportunities for brands to completely re-imagine how games should be played. Haptic technology is one area where brands can implement a completely new gaming experience that foregoes the need for applied pressure – which can be difficult for people with limited movement – and is more about intuitive gestures that can be adapted to the players’ mobility needs.

The Bristol-based company Ultrahaptics has created a gesture control system that uses ultrasound to offer haptic feedback when a command is given. While the system has been created for in-car use to control audio and connected car applications, it is easy to imagine how this concept could be applied to gaming. 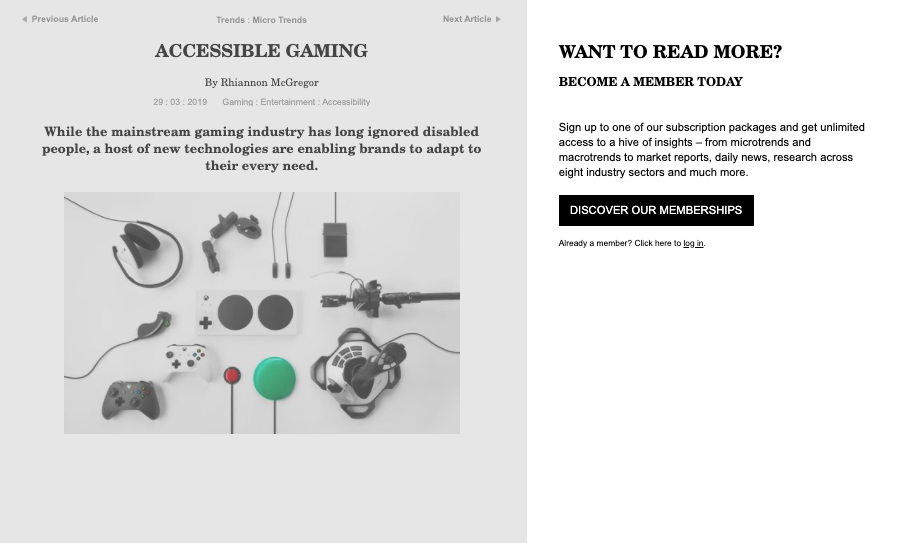